If you want to know how we got here, you don’t need to play Aimee charades. You can just check out the previous analysis here.

Spice Up Your Life

Another entertaining (but overly long) episode with our entertaining cast. I’m glad they are entertaining because the gameplay leaves me scratching my head. I guess I wasn’t really expecting much more from Markzan to be honest, and while he was a lovely fellow, I’m glad he’s gone. For a minute there once the votes were read I never thought he’d bloody go. First he gives us a chest beating. Then demands a hug from JLP (did anyone else’s testicles cry at the sheer amount of testosterone in the power of that embrace?). Then he calls back to the tribe to win the next one. And then still he has words to say about it being a blast! Anyway, as I mentioned last week he was this season’s Barry. He just didn’t seem to know what he was doing out there, and ultimately it led to his departure.

Is there anything Markzan could have done to prevent himself going home tonight? You’re damn straight there is. It was poor move after poor move. We’ll get to the ‘moral dilemma’ later. Surely this goes without saying, but, um, the mofo had an idol and he gave it away. He was never going to have the numbers to roll Locky, that’s just maths. Had he kept the idol he would have made it through not just this vote but the next as well. By then we’ve probably got a merge/shuffle situation and who knows what the future holds for Markzan. There’s not much more to say about him. It’s pretty clear he doesn’t understand this game. At one point Locky was explaining to him why he was not going to vote against Anneliese and how knowing that someone will vote with you is crucial to your game. And he voted Tessa! Again, clearly a nice guy, but not meant for this game. So nice that he sacrificed cookies for wood.

Christ on a Cracker

I really like this particular moral dilemma. Correct me if I’m wrong, but I don’t know that we’ve seen this before. An option to have a secret stash (I’m not talking about the one on Jarrad’s top lip). The risk is great and the reward is unique. I’m not usurped what I’d do in that situation. I’m leaning toward taking the cookies. So good on Jerichrist (not sure if that’s working. Maybe Jerkicho? Suggestions in the comments?) for that. Is there a way that you can leverage that choice though to gain a strategic advantage? I’m not sure. He already had Luke with him. And good on him for having enough awareness that Zenry was drifting away from Sam (as I mentioned previous post, further evidence that Zenry is not playing as covertly as he thinks). But does giving someone a few cookies strengthen bonds? Does it make you seem shifty? I don’t know. I’m also not sure you can buy a (salvation) army with cookies. What do you do when the cookies run out? I think if I were in this situation I would keep it to myself in the short term and wait for a way to leverage them to reveal itself.

Also did anyone else notice that he gave cookies to the most Jesus-looking person out there? Coincidence, or something more sinister? You regular readers out there know that I try to focus on strategy and gameplay, and stay away from judging the show, but I’m getting a bit sick of Jericho telling us about just how morally superior he is because of his faith. Unselfishness has nothing to do with Christianity. And plenty of studies suggest that as a group atheists are more altruistic than those of faith (google it if you must). Also the mofo doesn’t know much about Sesame Street if he thinks Cookie Monster doesn’t share, this really got my dander up. I’ll try not to dwell on this too much, back to the gameplay. Where to from here for our players in pink bandannas? 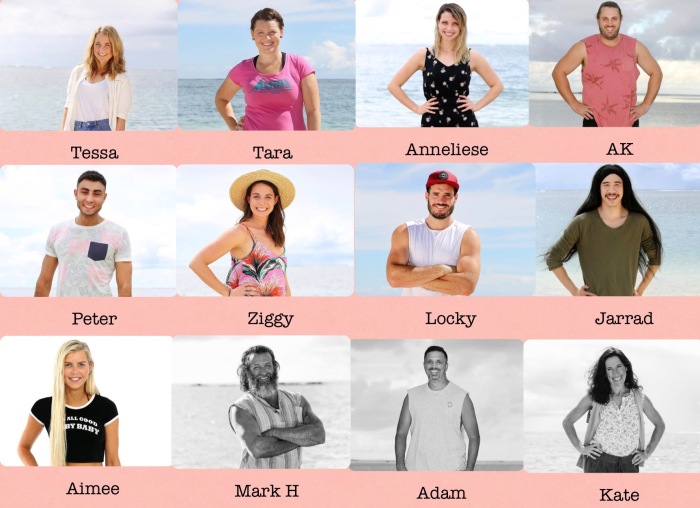 There were some commendable moves and machinations on display tonight. Let’s start at the top and work our way to the bottom.

While this guy irks me greatly, I am in awe of his social game so far. The way he was honest with Markzan in front of Ziggy and Aimee was beautiful. I mentioned previously that he’s leading by proxy. He seems to have this strange power whereby he asks everyone else what they want to do and agrees with them, but they still come to him for answers. If his strategy and timing is as good as his social game he needs to heed Tessa’s warning. Being a tall tall poppy people are going to start coming for him. While we don’t know exactly where Peter and Jarrad stand, there’s a possibility that they could start gunning for him. We just don’t know. We do know Tessa is scrappy and makes hints difficult, so as far as Locky, and most everyone else on Samatau is concerned, she should be next to go.

Once Tessa’s gone this so-called tight eight are going to have to start eating each other. How can he make sure that he keeps himself safe until merge/shuffle? Good question. I guess AK is the obvious person to move against but I’m feeling AK ain’t going down so easy. AK’s counter argument is simple, Locky’s too strong and influential to keep in the game. So maybe the option for Locky is to find another target. As I said, there’s a lot of people here that we don’t know about. My suggestion is to keep doing what he’s doing. Ask Anneliese and Ziggy who they want gone next and promise them he’ll vote their way. It should only a hop, skip and a jump through to the merge/shuffle from there. Just depends who the target is. Don’t pick AK, he’s too wily. The others’ wiliness levels are so far unknown to us.

Good luck. I don’t know what else to say. There was some wise gameplay on display from her today. She knew that overplaying it was only going to dig a deeper hole for her. She made a (albeit unsuccessful) pitch to Locky, when she realised it was falling on deaf ears she did the only thing she could do really and look for an idol. Also her social bond is strong enough with Markzan that he felt obliged to give her the idol. I like her a lot but don’t want to see her go the way of the Phoebe and burn out early. Really though, I don’t know what she can do from here. Keep looking for idols for one. Aside from that, maybe push the Tara thing further. She really needs to force a crack somehow. I don’t know that she is the right person to try and force a mutiny against Locky. Again, we just don’t know where a number of Samatau’s are at. If anybody out there has any ideas I’d love to hear them below.

More smart play from Male Rebel Wilson tonight. There was no way he would flip and work with TessZan. The numbers just weren’t there. But he was savvy enough not to burn the bridge with Tessa. He was sincere in his dealing with her (I can’t believe I just used the word sincere when talking about AK), and the humility he showed at tribal council was perfect for him, sincere or not. And he owned his game. Where to from here for AK? Once Tessa is gone he could very easily find himself at the bottom, he needs to start building a sub alliance. I hate to say this again but we just don’t know enough about the tribe dynamics to make an informed decision on who to move against, who to side with, and whether he can and should use Tessa. He needs at least four people on his side to get through, and it’s easier to get those four with Tessa than without her. But if he’s seen to be working with her then that puts a target on his back. I have no idea who else could possibly be interested in working with him. Surely there’s someone who’s the next rung up the ladder from him who is vulnerable that could be swayed. Particularly if that person isn’t smart enough to know that a merge/shuffle is around the corner (I’m guessing when we are down to 19, although I wouldn’t be surprised if production did it now just to shake things up for Samatau). So far Aimee doesn’t seem too sharp, of course that could just be her edit. Maybe Tara? Peter? Whatever the case he’s on shaky ground.

What will Monday night bring? Hopefully an Asaga immunity challenge loss. I got nothing else for you, head back to camp.

(Most memes created by Russell Feathers, most everything else and all gifs Channel Ten)