If you’ve not read analysis of the previous episode, no need to scrap and fight, you can read all the buzz words here. 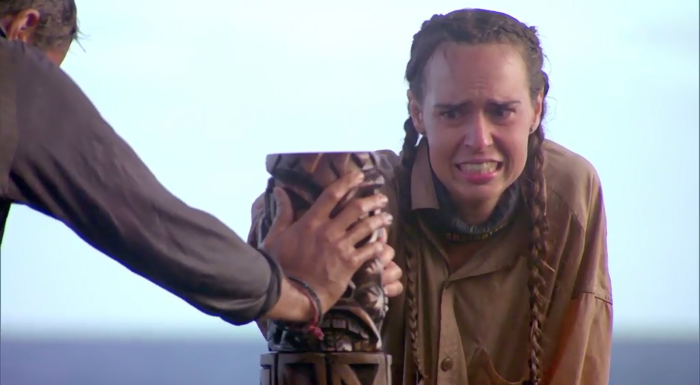 Congratulations Kristie. Winner of Australian Survivor 2016. Arguably the first time Australian Survivor was done right. Kristie said “if it feels right, it is right” and that’s kind of the way I feel about this season. This isn’t a place to analyse Survivor as a show though, it’s all about breaking down the game and the strategy. Given this is the end of the season and such an emotional episode, perhaps I’ll indulge myself and give over to a little bit of commentary on the production. And there’s not really all that much to actually break down this episode, so let’s just get started on the mini banquet.

There was a lot of talk online and in the tv advertising over the last week describing this challenge as ‘epic’. Now that’s a word that gets abused and overused a lot in my opinion, and coming into the episode I was expecting such abuse would happen again. They really put the challenge up on a pedestal (see what I did there?), and deservedly so. For me this WAS an EPIC moment in Australian television. I can’t think of anything bigger. The Beaconsfield miners is the only thing that comes to mind, and being real reality, that doesn’t really count (reading this back through, it’s possible that I may have been overwhelmed with emotion when writing this). Though this is the same final immunity challenge as the first US season, it was a much grander production. Not only was the setting more spectacular, the production and editing was tight, if a little overblown. As the tide swelled, so did the music. And those magnificent wide sweeping shots of the ocean and the cliffs, and the three, then two survivors arms outstretched and joined symmetrically at what they were fighting for. It worked, it had me sucked right in. Especially when Kristie started operation Lee Daddy. This scene for me was incredibly reminiscent of the 3rd act of Empire Strikes Back. The music approaching crescendo, the weather picking up, both of them drenched and precariously teetering above the abyss that is failure. It was an incredible scene. And that shot of Kristie’s dad carrying her off in her arms, there was a tear rolling down my cheek. 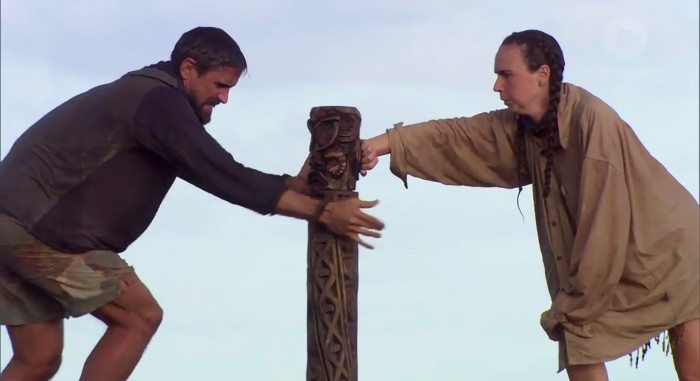 Strategically, the plea to Lee was fantastic. I didn’t see it coming but boy was it delicious. Why wouldn’t you do it? What have you got to lose? It put him in a position where he has to make a decision, potentially breaking his concentration. And it is just the sort of thing that Lee would go for. What we don’t know, and what I think is going to be debated for decades, is whether Lee let Kristie win. In my mind this question will be up there with ‘Who shot first, Han or Greedo?’. I wonder if we’ll ever know.

I don’t think I can ever hear those words again without thinking of this moment. “I’ll take you”…”I’ll take you!!”. This was our “You had me at hello”. Our “As you wish”. Our “Nobody puts baby in a corner”. Schmaltz aside, was taking Lee the best move for Kristie? I don’t think you can argue with the outcome, that’s for sure. I think she was beholden to the deal. Now I’ve always said you can lie, cheat and steal. But when you make a deal like that in the final immunity, it would take some real fuggin chutzpah to renege on that. Arguably, she had a better shot against El. If people thought Kristie had done nothing to make it this far, then El had somehow done less than nothing. El may however have more friends in the jury than Lee. Certainly, she would have had Lee’s vote. Possibly she would have also had Flick’s and Brooke’s vote. I suspect El would not be able to sell herself to the jury as well as Lee. Lee on the other hand probably has more enemies on the jury. So really, as I said three episodes ago, she really could take her pick and would have won regardless. Speaking of tribal.

Kristie owned the final tribal. Though at the start it didn’t look like it was going to go that way at all. The first words that came out of Kristie’s mouth were, and I’m only slightly paraphrasing, “You all thought I was crazy, but I proved you wrong”. Arrrgggghh! I strapped in, I thought we were in for a bumpy ride. You can’t tell the jury they’re wrong and then expect their vote! Then she went on to tell them what they should have done once the merge happened. Holy shit! First you tell them they’re wrong, then you tell them what they should have done?!?!?! This was not a good start. Fortunately, she redeemed herself with some articulate answers where she owned her game. It was great for her to come in with some facts and figures too. That she had seen twenty tribals, and knew who was going home in each of them. I won’t fact check that myself, hopefully someone can confirm in the comments. Regardless, to me and it seemed to jury members also, evidence is always better than cliches and platitudes, which Lee predictably spouted. There were many fantastic moments in this tribal. Too many classic lines to mention. I have to mention a few that really stood out for me though. Lee’s “comfort spoons”; JL’s “Nice to meet you”; as anticipated Sam’s sentences didn’t make sense, he shouldn’t try and use words that are bigger than his name. As expected, this was the Nick show though. So many corkers, from “manly things” and “balls to the wall”, to the “magic land” and “lieutenant Lee of the morality police”. (To be fair to Lee, he responded pretty well to this. Wisely, neither Kristie nor Lee were ever drawn in to an argument. I can’t think of a time where a Survivor argued with a jury member and still got their vote). Even Lee’s son, Jake, got a nice line in about “Obi Wan KenobLee” (okay i just bastardised the words of an eight year old for my own amusement, don’t go all morality police on me). Speaking of kids, this is the moment I lost my shit. When those boys saw their dad for the first time in over 55 days, the floodgates opened. If anything were a tsunami this episode, it were my tears on the couch. I bawled like a fucking baby. Then Kristie won in a landslide, and I smiled through the tears.

And that’s as good a place as any to end the analysis of the season. Just as it started, bawling like a baby when I was informed my application to play wasn’t accepted. Speaking of looking back, what I’m going to do now is to relive the past three months, and go back and read the journey. You might like to join me here.

I got nothing else for you. You can head home.