If you want to catch up on my analysis of last week’s episodes, you can do so here.

After the twists and turns of the last three episodes, it was a welcome relief to have an episode free of surprises and audience blindsides. Not only did it make things easier for my fragile, sleep deprived sensitivities, but it also meant that we finally got to see some gameplay in the Vavau tribe, which has been sorely lacking in the series up until this episode.

With Conner and Sam deported to Vavau, I thought we’d see some more of the Conner hustle. Him understanding that he is on the wrong side of the numbers, trying desperately to shake things up to keep himself alive in the game. Whether by design or by default, we didn’t see that from him, and that really worked in his favour. As I was watching things play out on camp, and with it initially looking like Conner was going to go, I started thinking whether Conner had made the right move in bringing Sam over.

I think I understand why he did it, because at the point that he had to make that decision Sam was arguably his closest ally in the game. It just made me think that it may have been prudent to bring over someone that was going to be less of an asset to Vavau than Sam is. Regardless of whether or not it was his best move, I can’t really judge his decision harshly. He was forced to make a snap decision without any forewarning, you’d have to go with your gut in that situation. As I was saying though, I thought it was smart of him not to try and hustle as I suspect that would surely have led to him being voted out tonight. Vavau just got rid of a big strategic player in Nick, they don’t want to replace him with another one in Conner. Had they seen any hint of this in Conner, there’s no doubt he would have been given the boot. Instead, Conner played the ‘please keep me around, I will be an asset and be in your debt’ card. A move which in the past I would have thought had no hope of having any influence whatsoever, but here seems to have actually kept him in the game. It certainly seemed like before he made this speech he would be going home tonight. He sincerely worked those naive little puppy dog eyes and it paid big dividends, with the tribe ultimately sending Baz packing. But was this a good move for the tribe? More on that below. Sam, does nothing, and that works out just fine for him. I’m disappointed in Sam. All we saw was him try and find out what was going on through Kate, arguably the least ‘in the know’ member of old Vavau. Sam, it’s about time we actually started seeing some gameplay from you… 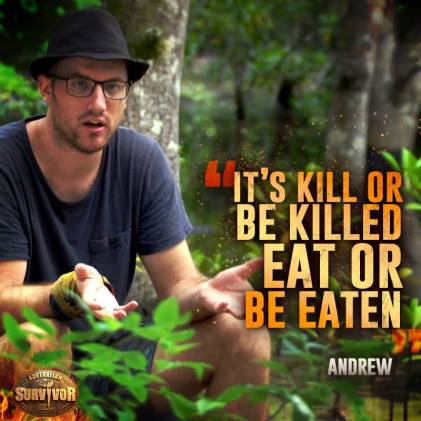 As we’ve suspected all along, Andrew got game! Firstly, we see him casually talking with every member of his tribe today. It’s pretty clear to astute observers looking at these relationships that his social game is strong, something that I was worried about as we haven’t really seen evidence of this before. But we also get some meaningful face time, where we learn that he is a shark and Craig is his prey. While I’m watching this I’m thinking ‘YES!’ we are finally seeing the emergence of his strategy, but at the same time I’m yelling at the screen “NOT YET ANDREW!!!”. There was no way that a move against Craig was going to work this early. Especially when everybody is already feeling conflicted about Barry vs Conner. I think I can see what he was thinking, that there’s some new blood and some new numbers here, maybe he can use those to his advantage. Smartly, he assesses where this move would sit with his current alliance before talking to Conner and Sam. Double smartly and doubly smart, when Sue warns him against voting off Craig, he drops it.

I am interested about Sue knowing that he was going to talk Craig, makes me think there have been some conversations there that we’ve not been privy to. There’s obviously a lot more going on in this four than we’ve been led to believe. Perhaps there was more discussion leading up to the Nick vote than we were shown. I guess when you haven’t gone to tribal for two weeks, you can’t help but start running multiple scenarios in your head and this may be evidence that Andrew has started to form an alliance within that core alliance of four. Clearly much smarter than Matt’s effort last week, who showed us he had not even thought of a plan B. Damn I hope Vavau go to tribal tomorrow night so that I can see more of this. I should point out though that I don’t really see why Andrew thinks Craig is a threat. I can see why Nick was, Craig not so much. I guess it will become apparent once we see some more of Craig in action.

I intimated above that I wasn’t convinced that getting rid of Barry was right for Vavau. Though I think it was right for Andrew’s purposes, as he now has the option of using the old Pu’s as his new crew for the Craig coup (and my son says I can’t rap, h’yeah right), I really don’t see the reason that you would get rid of Baz, unless you felt that his vote randomiser was trained on you. Even if it is, unless he has people with him, which he doesn’t, then, much like a weasel with a rolly-ball, there is no power behind his chaos. Much better to keep him around until merge, where his vote is actually useful as you know he won’t vote a Vavau. Give me your thoughts below?

What Would Sue Do?

Now that we know that Andrew is starting to position himself to get rid of what he sees as a threat, I do wonder what the rest of the Vavau four is thinking? I come to the conclusion that we haven’t seen enough of them to know. They seem tight enough, and there’s enough of them that they could comfortably make it through to first merge without any of them going home, provided that if they do go to tribal they just boot Conner or Sam. As they are this tight, I suspect that may actually be the best move. Stick with the four until merge. As much as I’d love to see Andrew overthrow Craig, I’m just not sure where it would put him, and Sue if she chooses to go along with it. It makes them much weaker going into the merge. We also know that Sue is seen by Nick, and maybe Tegan, as not trustworthy given what has happened to them, if she meets up with them again and Craig is no longer around, she will be seen as a threat. Maybe that is what Andrew is counting on, that it will look like Sue is masterminding this. As far as Jennah Louise goes, I have no idea where in the four she stands, closer to Craig, or closer to Sue/Andrew. Again, I’m hanging out to see more of Vavau in the episodes to come. That’s enough Vavau for now, how about a quick discussion on the little we saw of Saanapu and Aganoa.

Nick is a Playa!

It was bloody delicious when we saw Tegan talking with Brooke about how Nick had chatted up the two of them (if you missed this tasty morsel, or want to savour it agin, do so here). I said it last post and I’m even more confident now, Nick will not win this game. Great pick up from Tegan to see that Brooke didn’t trust Nick, and she started making moves to distance herself from him. Though I don’t think she could crack the Brick (see previous post), she could certainly be the wasp nest sticking to it while the season is right.

I’ll finish off with a quick acknowledgement of Kristie tonight. Kristie tonight reminded me very much of Aubry from the most recent season of the US version of Survivor. Started as a neurotic, paranoid and anxious ball of cry, and is now starting to show us that she has had some strategic thoughts. I get it. I think I would be the same in some ways. It could take me a while to get my bearings and get comfortable in a new environment with new people too. I’m so glad that she is still here. The way we saw her subtly start building the relationship with Phoebe was very encouraging. To me she came across as very human and genuine in her conversation with Phoebe, yet she knew that Phoebe was not to be trusted. While I don’t necessarily think that Kristie has moved into a threesome with Phoebe and her El-iance, she certainly showed that she has what it takes to form a strategic pairing with someone, she just needs to find fertile soil in which to plant that seed. I really hope that we see Kristie blossom into something Aubry-esque this season, that would be magnificent.

Until next episode, I got nothing else for you, head back to camp.