Have you read my assessment of the previous episode yet? If not, read it here.

I’m sorry, I had a great discussion prepared regarding all that happened tonight. Unfortunately, at one stage J-LaP said the following: “Vavau half-swimming, half-running, like dolphins”. Does J-LaP know what a dolphin is? Has he just seen some fuggin amazing dolphins?

I’m just going to take a few minutes to process that one before I go on…..

Okay, I think it’s best if I just try and keep that out of my mind. On with the show.

Tonight saw us finally say goodbye to Pete. I’ve already written at length regarding how I feel about Pistol Pete, and any contestant, pulling themselves from the game so I don’t want to spend much more time discussing this except to say that I wish P.P. all the best.

Firstly, if you’re out looking for the idol with someone else, my thoughts are that if you do happen to find it, you try and hide the fact that you found it. It looked like Rohan had the opportunity to do that, if so, he should have. Unfortunately for him, he didn’t, and that’s where the problems started.

Why did Rohan choose not to give it to Phoebe? Does he not trust her? I hope that is the case as that certainly seems wise at this stage. The way Phoebe acted in the interaction where she confronted Rohan about him keeping the idol (above) just screamed treachery. There is no way I would give her that idol, however he didn’t do a really good job of letting her feel safe that he was keeping it, though I don’t know that there was any way he could have. This being the case what do you do? Well, if you’re Phoebe it seems that you get rid of Rohan. This would be a wise thing to do if you’ve got his trust and he’s not going to play the idol. But if I were Rohan I would not be feeling comfortable around Phoebe at all. While Rohan did not do a good job of making Phoebe feel safe, nor did she he. Interaction above aside, the whole interaction with El, Rohan and Phoebe about getting rid of Kat also seemed to my eyes and ears to be superficial. This should be enough to have Rohan feeling like he needs a new plan.

Any time I see two people on the bottom, or whose heads are both on the chopping block I think to myself, “would it be wise for these two to get together and flip it?”. In this case, I think the answer is a big yes. If Rohan is sharp he’ll realise that he really needs to scramble, Phoebe wants him gone because she can’t feel in control while he has the idol. El will do whatever Phoebe says and Lee has lost trust in him because not only did he lie about finding the clue, he also has not told Lee that he has the idol. Incidentally given that she wants him out it was a sweet move going to Lee and telling him about Roh’s idol. Machiavellian manipulation! Evan take note, interestingly this is the exact move that Evan tried which backfired and shifted El and to a lesser extent, Lee, against him. This is a great example of how it’s all in how you do it and the relationships you’ve already built. Back to Roh and Kat, Roh needs help as he’s on shaky ground. I think Kat can provide that. This is the third time for her that she’s faced elimination and I’m not sure that she fully feels stable with her group of women.

I’d like to think that if Rohan told Kat he wants to flip it, ….. he could save himself.

If Roh has a good enough relationship with her then maybe he could could bring her on side, showing her the idol might be one way to do that. Even if she already knows that he has it, he doesn’t know that she knows that he has it and she would know that (I think that works?).  I’d like to think that if Rohan told Kat he wants to flip it, shows her the idol, and perhaps lets her choose who to flip on, he could save himself. Of course two isn’t enough to flip it (though Roh does have the idol), but I suspect once you’ve got Kat, Kristie would happily follow. Keen observers will note that Kat and Kristie have sat together at every tribal council. 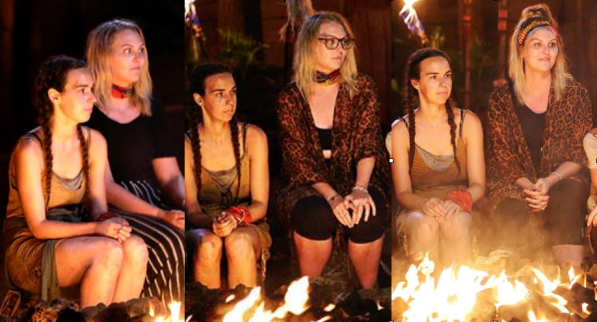 This, as well as the fact that they seem to have bonded over being on the outs, tells me that they are an easy twofer. If they can get together and use the idol to vote out one of the other three, then that makes them three strong in a group of five. Of course this potentially makes Rohan a sitting duck once he no longer has the idol. In this situation Rohan would want to ensure that it’s Phoebe or El that goes, as well as keep Lee in on this as much as he can, or hope that Aganoa doesn’t go to tribal again before merge.

Immunity idol notwithstanding, Phoebe appears to be pulling the strings. If others know and are threatened by this, as Rohan, and even Kat, should be, then Phoebe’s going to need to be really careful about keeping herself safe. Her only way of avoiding a situation like the one described in the above paragraph is to work hard to maintain and reinforce those relationships and alliances she has already built with the others. I warned in my previous post that if she were not careful about the impression she were giving, she might start to be seen as a threat and only thinking of  herself. She made a comment in this episode when talking with El, as she was thinking about all of the possibilities and permutations, where she said something like “I’m just thinking through putting all of the pieces in place that will work for me, and you”, as though El was an afterthought. The best thing for Phoebe to be doing now is rather than saying to her tribe mates and allies “we need to do x” is instead ask “what do you want to do?”. She’s got to get those guys working WITH her, not FOR her or pretty soon they’re going to a) realise that she is a threat, and/or b) start resenting it. If Phoebe didn’t realise this before tribal, it should be completely clear to her now that Kat has had her say about feeling left out. She needs to jump on that straight away and get her feeling safe or else Kat might actually do something that is not in Phoebe’s best interest.

Before calling it a night I thought I might at least have a think about where Kylie stands now that her PP is gone. Her best case scenario is Saanapu doesn’t go to tribal before merge and hope that the buffs fall her way when tribes are mixed. Regardless, it occurs to me again as I write this, just how important it is that she just work on establishing and strengthening those friendships and relationships with the rest of the Pu and get herself in a good swing position ready for when/if cracks start to appear in the big four. As far as Conner goes, I don’t see him being that tight with the four and really have no idea where he fits or where his head is at, so I really don’t suggest, though I don’t think it would necessarily be unwise, for Kylie to try and buddy up with Conner. I think that could put her on the outer even more. What are your thoughts? Leave a comment below.

Until next episode, I got nothing for you, head back to camp.