Well, episode 1 done and dusted. What are your thoughts? I for one am happy that thus far they haven’t fucked it up. To me it feels just like US Survivor, which is just what I wanted. The music, the cinematography and editing, the challenges, the host, it all feels very comfortable and familiar to me. Let’s have a brief rundown of the episode and analyse what little strategy we saw and discuss what we might expect for the coming season.

Let’s be honest, Jonathan is just like Jeff, and we wouldn’t have it any other way. From tribe introduction through to challenge through to tribal council, every phrase that came out of his mouth was straight from the Probst playbook. I have zero problem with this. 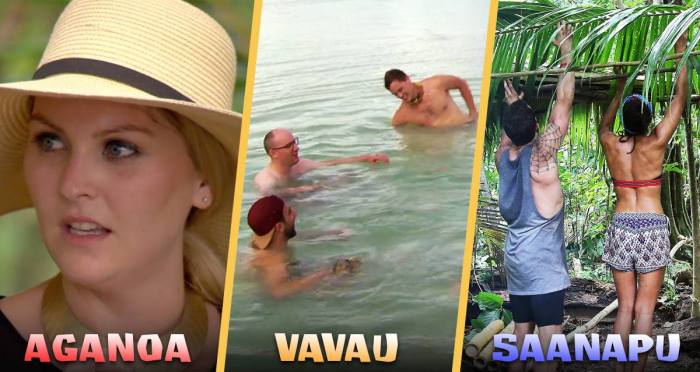 With 24 contestants I think we were all expecting them to be split into 3 tribes of eight, and that is exactly what we got. Each tribe an even mix of males and females (it appears). Though I haven’t averaged out each tribes’ ages, we can see that each tribe has one of the over 50 year old contestants.

This tribe seemed to struggle early on. They had no idea what to do or what was going on and couldn’t seem to make any sort of progress in setting up camp. This was partly down to the age old belief that, when you step out as a leader, you put a target on your back, as voiced by both Nick and Andrew. Astute watchers will know that this is not necessarily the case as there have been a number of early leaders who have taken the title of sole survivor, not least of these being the infamous ‘Boston’ Rob Mariano. My take is that it is ok to be a leader, you just don’t want to be a ‘boss’, which we’ll talk about when discussing Kat from Aganoa. Andrew certainly seemed to fly under the radar and not stick his neck out as a leader at all. Nick seemed to have more trouble keeping out of the spotlight, and though he certainly did his fair share of leading, at least he did not come across as bossy. So without a nominal leader, things weren’t going too well. My early impressions were that if things continued this way for Vavau then they could be one of those pleb tribes that lose all of the early challenges and is decimated. Somehow, much to my dismay, they managed to pull together (insert masturbation joke here) and get a reasonable camp set up without any friction and with plenty of laughs (for them, not us).

Not much to see here at this stage, everyone very friendly. Saanapu has however given us our first introduction to strategy in Australian Survivor. Firstly, Bianca. Bianca is a private investigator, and tells us that she is trained to gather intelligence about people and know how to use it. She has chosen to hide this and has told the rest of the tribe that she works in insurance. Fair call. If I was in her position I would have done the same, because if I was there and knew that she was essentially a spy, I would be very wary and would potentially see her as a big threat. We also see our first movements toward people making alliances with Flick approaching Conner, and at least starting to talk numbers and forge alliances. It’s early days and we’ll see how this plays out over time no doubt. Hopefully we’ll get some tension in the tribe sooner or later and they’ll be worth watching.

Finally here were see some friction and some tension, most notably from Des and Kat. Des, the self-confessed villain of the game, who chose to do nothing around camp and play his own game, was shall we say, ‘more than a little put off’ by the ‘loveable dictatorship’ of Kat. Kat was bossy, and seemed happy to be that way. Des, made it abundantly clear that he won’t be bossed around by some whippersnapper from the “cafe latte set”. Sparks flew, unfortunately, not enough sparks to make a fire. And speaking of fire, what was with Evan lying to the other tribes about having fire? Some mind games I guess, I’ve no problem with that. Great work from Jonathan LaPaglia, knowing that they had no fire and probing a little more about that, essentially calling them on their shit, until finally Rohan cracked and couldn’t or wouldn’t stay complicit in the deception. I wonder where that puts Rohan in Evan’s mind. Hopefully we’ll see some more of these shenanigans in the future.

The challenge was a pretty typical survivor challenge which I was happy with, a little on the long side. A physical gauntlet and some “hardcore pulling” (giggle) ending in a puzzle. Aganoa struggled throughout the challenge, but in my mind it was the decision to put Kat and Des together on the puzzle that led to their downfall. My guess is that they ended up being the puzzlers as they were the least physical competitors in the tribe. Unsurprisingly, they did not work well together, sending Aganoa to the first tribal council of the season.

Not much to say about our first tribal council. Rarely do we see fireworks in the first tribal of the season and tonight was no different. Lee did his best post game interview and told us how things just didn’t seem to work in their favour despite them all putting in their best efforts. Thankfully he stopped short of actually saying ‘full credit to the boys’. Points go to Rohan for at least trying to light a bunger and call Des out on his bullshit.

“I Need to Scramble Fast and Hard”

These are the words of Des upon losing the challenge. Well Des, I hate to say it, but if you’re going to play the game you play, the villain game, your strategy needs to be more than just, ‘be a prick and hope you don’t go to tribal’. If that’s the game you are going to play, there needs to be some strategy that goes with that. You need to be making connections and forming alliances, at least with one person. Even if that person just wants you as their goat, then at least maybe you have them advocating for you. He didn’t do any of that in the lead up to the challenge so all that he was left with after the challenge was to show them he could be useful. All in all it was too little too late for Des, and he gets booted out in a landslide. Of course the show made it look like it could have gone either way between Kat and Des, and had Des had one or two people to advocate for him, or enough people who were wary of Kat, then perhaps its could have gone the other way. Certainly if I was on that tribe and I was getting a feeling that it was close between Kat and Des, I could definitely see myself considering taking out Kat. Arguably, Kat is the bigger threat, she has a better chance of getting the numbers than Des and could go all the way. So potentially it could make sense to take her out now and get rid of Des later. The other advantage to this is that Des is put on notice,  now that he has shown us that he can be handy at camp, I’d imagine that if he somehow scraped through the tribal he would continue to pull his weight post-tribal, after having already felt the fear of going home. However, if I could see that it was pretty clear that Des was going to go, I wouldn’t try and make waves, I would go with the will of most of the tribe and cut him loose. Trying to keep him and losing only puts me on the outs of the tribe and has others thinking that I’m sly. Not a good start.

Other points of interest

Nobody looking for hidden immunity idols!?!? I need not say much more than that. I thought these people were survivor fans! I guess that it’s easy for me to say that in the comfort of the pub I watched in. It may be another thing when you are actually there facing the elements and actually experiencing and having to play the game and deal with all of these new people.

That’s it from me for tonight. Let me know your thoughts in the comments below. Stay tuned tomorrow for my analysis and breakdown of episode two. I got nothing else for you, head back to camp.

14 thoughts on “Wanna know what you’re playing for? Episode 1 – ‘Paradise City’ or ‘Welcome to the Bungle’”